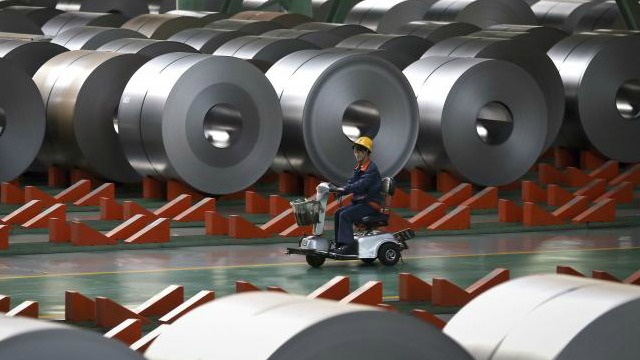 China’s leaders want to move the world’s second-largest economy away from exports. Yet, for its steelmakers, this is turning out to be a bumper year.

Chinese exports of steel were a record 8.52m tonnes last month, an increase of 73 per cent from a year earlier, according to customs data.

Hit by slowing domestic demand, tighter environmental regulations and growing debt loads that are becoming harder to pay back from sales to the domestic market, China’s steelmakers are looking to export their way out of trouble.

But their action could trigger a backlash in the US, which recently approved anti-dumping measures against South Korea and other producers of steel pipes, as well as in Europe, where a steel industry case was filed in mid-May.

The industry is “mired in overcapacity,” China’s customs spokesman Zheng Yusheng said in Beijing during the release of export data this month. So much so that prices for steel in some parts of China are now as low as the price of cabbage.

Although most of China’s exports are generally directed towards Asia rather than Europe, there is a knock-on effect on prices and global steel trade flows.

“The US steel industry is facing a very sizeable increase in imports from around the world,” Kevin Dempsey, senior vice-president of the American Iron and Steel Institute, says. “We’re seeing some signs of improvement in the US economy and it seems that all of the growth in steel is being taken from imports, including that from China.”

The exports are driven by a state-owned industry focused on output rather than price, says Mr Dempsey. Removing government intervention in the industry “is an important goal that we should be pursuing,” he adds.

“As the Chinese economy has slowed they are looking to export the steel that they can’t sell domestically and that’s disrupting markets around the world,” Mr Dempsey says.

This is being reflected in the market place. Global steel prices have fallen 7 per cent since January, according to an index run by London-based metal consultancy CRU. Falling global prices for iron ore, the main ingredient in steel production, have also lowered costs for mills and allowed them to sell steel more cheaply.

“Chinese exports are at record levels and global steel demand on a regional basis is nothing like record levels,” says Mike Shillaker, managing director of Global Steel and European miners at Credit Suisse.

08/01/2015By adminLatest News
PrevEuropean Commission: Overview of the Steel Industry